“Seest thou a man, diligent in his work, He shall stand before kings and not before mean me” Prov. 22:29 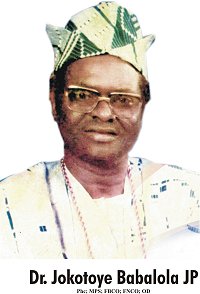 Dr. Deacon Joseph Jokotoye Akinniyi Babalola, Alade Ogboo, a quintessential gentleman, had impeccable pedigree having descended from the Oyenekan dynasty of Ile-Otun, Oke Olola, Ogbomoso. Yoruba custom and tradition ordinarily would not have allowed me to call him by name, he being an Elder and a Senior to me at a “School” where seniority is all important. Therefore, I call him “Egbon Atata” a phrase coined by, and which I have borrowed from Professor E. A. Ayandele, hence the sub – title to this tribute “Egbon Atata”.

With the wind of nationalism blowing in the 1940’s he must have been influenced when Dr. Nnamdi Azikwe dropped Benjamin and Chief Obafemi Awolowo dropped Jeremiah and he in the spirit of patriotism and nationalism dropped Joseph. Akinniyi is a name in the exclusive preserve of his darling wife, Mrs Adebimpe Babalola. He is fondly called by his Oriki, Alade only by late Alagba Deacon A. M. Laosebikan. But to all and sundry at home and abroad, the name Jokotoye Babalola is well respected and revered.

He had the good fortune to have attended Baptist Boys High School, Abeokuta and his devotion to the school and Old Boys Association earned him a meritorious award for the year 1999.His commitment to the school will continue to resonate long after he has left us. An example of this is in an article which he proposed to write has set out below in his own-handwriting on 22nd December, 2009.

He is soft spoken, serious minded, methodical in his way and meticulous in action. A good record keeper, chronichier and archivist, he surprised me early this January when he produced a hand written copy of “toast on Mr. S. L. AKintola at the reception accorded him by Ogbomoso Community, Lagos at the Glover Memorial Hall, Lagos on Saturday April 22, 1950 by Gabriel Adebayo Otunla.” Always neat and immaculately dressed he avoided flamboyance.

Egbon Atata was married to another favourite Egbon, my Aunt (Nee Bimpe Okanla) and they both made a unique marital couple. They are a role model to many of our generation. To those who know them they are a couple that compliment each other and their marriage according to Robert C. Doods “is not to think alike but to think together”. They lived a life of togetherness.

Egbon Atata was a great entrepreneur and made a success of enterprises he engaged in. what is unique is that he was not a monopolistic capitalist. Here there is a genetic factor. Like his father Daddy James Babalola, a prince merchant, transporter and cocoa farmer, he shared in a cooperative spirit his business success with others, thus many members of the family, friends and associates benefited from Western Chemist Optician Ltd., Allied Enterprises Ltd. and Wesco Clinic Ltd.

A renounced Optometrist, excellence was his hallmark. He has endowed prizes in Universities of Benin, Obafemi Awolowo and Imo State University where Optometry courses are being taught, His last service to the nation was as Chairman of the Optometrists and Dispensing Optician Registration Board of Nigeria.

A great philanthropist and devoted churchman he was always willing to help those in need. His many benefactions went beyond Nigeria Baptist Convention Circle, Ogbomoso Societies and organization and the Optometry profession.

Dr. Deacon Jokotoye Babalola at his departure was head of the Babalola Family Union and he passed the baton of leadership on to Mr. Okunlola Babalola. Egbon Atata, with his wife have bequeathed a veritable legacy to the society in their children, Professor Mrs Folasade Kosoko-Losaki, a combination of Babalola’s brain and Okanla’s beauty, Dr. Mrs. Abimbola Oluremi ever resourceful, and imperturbable and Oluwayisayo, up using young.

Dr. Deacon Jokotoye Babalola is now standing before the throne of the King of Kings and Lord of Lords.

It is Sweet Adieu.